Skip to content
JUMPSTART YOUR 2022 - FREE SHIPPING ON ALL ORDERS

Tom Dickson is back with his biggest (and most expensive) blend yet.

Will it blend? That is the question asked and answered by Blendtec founder Tom Dickson during each of his dozens of Will It Blend? videos published on YouTube. The video released yesterday is the 133rd in the series and features the world’s strongest blender taking on the highly anticipated (and hotly sought after) iPhone 5c and gold iPhone 5s.

The video begins with Tom in his trademark white lab coat explaining that it was just too difficult to get his hands on a sold-out gold iPhone 5s. To make up for it, he explains, he acquired four colored, plastic iPhone 5c phones, which he prepares to blend all at once. That’s when his alter ego, “Gold Tom,” intrudes into the scene—along with a gold iPhone 5s and a gold Blendtec Designer Series blender—and challenges regular Tom to a blend-off. Which is the better blend? See the video and decide for yourself.

The video is the most expensive Will It Blend? to date. Its views will add to the more than 227 million total views on Blendtec’s Will It Blend? channel.

Win your own gold blender 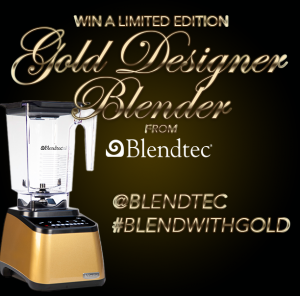 For giveaway details, visit facebook.com/Blendtec. While you're there, let us know what you would blend in your gold Designer Series blender!