One of the most exciting things we get to be involved with at Blendtec is seeing our products being used by young and old and in homes, restaurants and beyond. We've also been able to see widespread acceptance from some of the great sports teams across the country and with being the Official Blender of the Gatorade Fuel Bars that are hosted by many NFL, NBA, MLB and NCAA teams! That being said, who are we picking to win "The Big Game" today? Let's just say we're a bit partial to one team.... 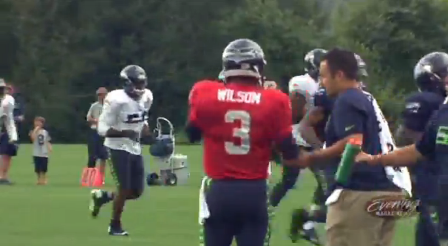 Seahawks Quarterback Russell Wilson and the Seahawks take their nutrition seriously with smoothies!

One of the most recent teams that has been seen using our Blendtec Stealth Blenders is the World Champion Seattle Seahawks and they even have a smoothie called the Seahawks Stealth Smoothie! How cool is that? Watch the following video from local Seattle Television King 5 and try out the "Seattle Stealth Smoothie" too!

Blend all ingredients, starting on low and switching to high once vortex has started.